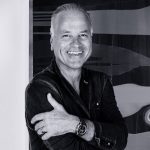 2016 Travels to Indonesia to finish his commission of four large sculptures for Croma, Klosterneuburg, Austria; Finishes his commission of three large sculptures for „Harmony of the Seas“, the world’s largest passenger cruise ship; Presentation of his work at Art Austria, Vienna; Preparation for his exhibitions at Galerie Gans and Cselley Mühle in Austria; Travels to Mallorca to get a commission for two sculptures; Preparation for a new trip to Asia at the end of 2016.

2011 Trip to Thailand, Indonesia and finally Australia; opening of his exhibition with sack sculptures and pictures in the Paul Greenaway Gallery.

2010 Production of his first high-gloss sculptures. His works are covered with multiple layers of lacquer after being cast. The start of a decisive turnaround in his career.

2009 Once again spends several months in India and Indonesia; works on new options for treating the surface of his sculptures.

2007 Trip to India, Asia and Indonesia; he produces 17 bronze figures.

2008 Several months’ sojourn in India; meets the graffiti artist Banksy on the beach. Their friendship lasts a month, then Banksy disappears into anonymity once more. Dalpra finishes seven large bronze objects and has them shipped to Vienna.

2006 Starts working for the first time with bronze.

2004 Builds his house and studio in Anjuna. In the following years this becomes a favourite meeting point where many friends and artists stay, among them Jakob Gasteiger, Erwin Wurm, Richard Kaplenig, Eva Wagner, Klaus Spiess and Max Boehme, to name only a few.

2002 Spends several months in India and Indonesia, where he finishes his first 28 sculptures in wood.

2000 Stays in India for several months. Produces 30 large-format pictures in a small studio in Anjuna, a village in Goa.

1999 Spends several months in Italy and in autumn embarks on a journey to India.

1998 In Ubud he starts working on his first sculptures in wood and rents a workshop in Mas, where his work shows exciting progress during the subsequent years.

1997 Spends several months in Indonesia and Australia. Invitation to Brazil, where he spends some months in Rio de Janeiro in an artist-in-residence programme. Meets Richard Serra.

1995 At the same time, he is invited by the Paul Greenaway Gallery in Adelaide to put on an exhibition.

1994 After a successful collaboration and exhibitions in Japan, Dalpra decides to leave the galleries in the USA and Asia and returns to Vienna.

1989 Trip to Australia; spends some months in Sydney and tours throughout the country. Start of his collaboration with the Sherman Gallery.

1986 The French mime Marcel Marceau invites him to spend some months in the South of France, where he presents his works in an exhibition at the Festival de Dance in Cahors.1988He spends several months in Berlin and travels throughout Europe.

1985 Trip to Spain and North Africa. Spends several months in Morocco and then travels to France, where he spends three months in Paris.

1983 Spends four months in Sussex and tours southern England.1984Dalpra begins his year-long travels, which take him round the globe. During the next 19 years he spends summer in Italy at Fattoria il Poggio, where an Italian collector puts a spacious studio at his disposal.